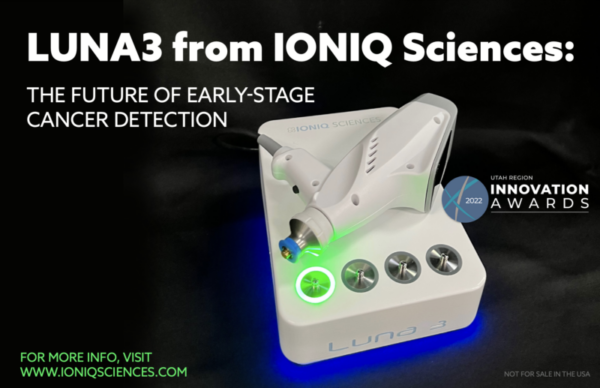 In News
By Andy Robertson

Salt Lake City, UT, June 23, 2022 – ProLung, Inc. dba IONIQ Sciences, Inc. (“IONIQ” or the “Company”) unveiled its next-generation platform called LUNA3™ for early-stage cancer detection. LUNA3 is designed to accelerate the transition of cancer testing from the hospital and doctor’s office into pharmacies and ultimately into consumers’ homes. IONIQ Sciences envisions a world where physicians and those at-risk of cancer can have clinically actionable evidence in just 20 minutes with no needles, no radiation and no surgery.

Mr. Jared Bauer, CEO, shared, “The body’s electrical properties change in the presence of cancer and IONIQ can detect it especially in the disease’s earliest, most-treatable stages when it matters most. In comparison, IONIQ Sciences out-performs well-known CLIA-certified blood tests, also known as liquid biopsies, in the earliest stages by a margin of three to five times. And now our team has made another breakthrough by developing LUNA3, which is modernized, simplified, cost-reduced and cloud-based.”

About IONIQ Sciences, Inc.
IONIQ Sciences, Inc. is developing an advanced multi-cancer screening technology for early detection that has the potential to expand the therapeutic window, dramatically improve survivability and reduce the cost of healthcare. IONIQ Sciences operates at the confluence of its Electrical Impedance Analytics (EIA) or bioimpedance technology and Artificial Intelligence (AI). IONIQ Science’s first product utilizing its proprietary analytic platform, the IONIQ ProLung Test™ for lung cancer, has been designated a Breakthrough Device by the U.S. FDA.

IONIQ Sciences is proud to be a key supporter and member of the newly formed BioHive, a collective representing the life science and healthcare innovation ecosystem. By embracing diversity and collaboration, BioHive has become the fastest-growing life science community in America and their innovations are improving the lives of millions of patients. To learn more, please visit: www.biohive.com.